One of Dara Damery's stroke recovery goals was to give a thumbs-up.

Duke Raleigh Hospital is one of a handful in NC that offers lifesaving thrombectomy for stroke. Dara Damery got transferred there from Wilmington just in time.

Damery, a 36-year-old Wilmington attorney, first noticed something was wrong during a lunchtime visit to the beach. “I dropped my pudding cup,” she said. “I just looked down at my hand and it was gone. I didn’t know how it had happened.” On her walk back to her car, she dropped her phone. “I kept trying to pick it up, but I couldn’t. It was strange. I felt clumsy.” Damery fell, scraping her shoulder and knee pretty badly. The episode seemed to pass, and she cleaned herself up and returned to work.

Shortly afterward, her boss invited her to his office to join a conference call. “I remember falling asleep during the conference call,” Damery said. “I couldn’t control it.” When her boss woke her up, he noticed the left side of Damery’s face was drooping and quickly called for emergency medical services.

Quick action needed at first signs of a stroke

Damery was in the throes of a serious ischemic stroke. That’s when blood flow to the brain is disrupted due to a clot within a blood vessel. Without oxygen-rich blood, brain cells rapidly begin to die, which can lead to severe disability or death. The episode near the beach earlier that day had been a transient ischemic attack (TIA), sometimes called a mini-stroke or warning stroke, which can occur before a full stroke.

When she arrived at the local hospital, Damery couldn’t speak clearly or move her left side. A CT scan revealed a large clot blocking the main artery on the right side of her brain. Emergency room doctors gave her the clot-buster drug tPA. When that didn’t work, said Damery, “They told me about this procedure where they could go in through my groin and pull the clot out of my brain.” Called thrombectomy, it’s currently only performed at a handful of hospitals in North Carolina, including Duke University Hospital and Duke Raleigh Hospital. To be effective, thrombectomy must be performed within six hours after stroke symptoms appear.

A race to get to treatment in time

With the six-hour mark looming, Damery’s local ER doctors decided to rush her to Duke Raleigh Hospital, the closest one offering the procedure. But getting her there on time wouldn’t be easy. “There was lightning in Wilmington, so they couldn’t fly me via helicopter,” Damery recalled. “They put me in an ambulance, but there was a traffic jam on I40.” The driver had to turn on the siren and drive on the shoulder to get through the standstill. “But they got me to Duke in time,” Damery said.

Duke neurosurgeon L. Fernando Gonzalez, MD, performed the procedure. “We puncture the femoral artery in the groin, and then we thread a catheter all the way to the site of the clot,” he said. The catheter -- a thin, flexible tube -- carries a small mesh cylinder called a stent. “We have a suction pump that sucks the clot into the stent,” Dr. Gonzalez said. The clot gets caught in the mesh of the stent and both are removed along with the catheter.

Shortly after the procedure, Damery’s stroke symptoms began to recede. She could lift her left arm; a few hours more and she could lift her left leg and push down on her toes. Regaining manual dexterity took longer. Her doctors gave her the goal of performing two hand gestures: the thumbs-up and the two-finger peace sign. “I did a tiny little thumbs-up after an hour or two, and I was really excited about that,” she said. “But it wasn’t until the next day when I was better at it. And it took almost a week until it was a good one.”

“She did very well,” Dr. Gonzalez said. “Three weeks after the procedure, she was back to work.”

Five months after the stroke, Damery was nearly fully recovered and grateful for how quickly everyone worked -- EMS, her local ER doctors, and her team at Duke -- to get her to the lifesaving procedure in time. “They tell me ‘time is brain,’ and it really is,” she said. “Everything worked out. If they had missed one little thing or the timing had been off, I might not be here today, or I might not be able to move.” 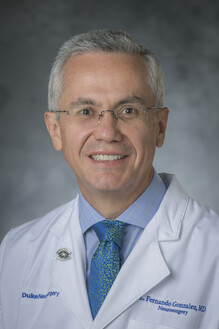