If daily life leaves you breathless, you may just lead an unusually exciting existence. But if you’re a current or former smoker who is middle-aged or older, there could be another explanation: chronic obstructive pulmonary disease, or COPD.

COPD refers to two related lung diseases: chronic bronchitis and emphysema. In chronic bronchitis, the bronchi -- the airway tubes leading into the lungs -- become inflamed, irritated, and scarred. Emphysema refers to the enlargement and destruction of the alveoli -- the balloon-like air sacs within the lungs that allow the transfer of oxygen into the bloodstream.

“It’s rare to have one form of COPD without the other,” said Duke pulmonologist Neil MacIntyre, MD. “Most people with COPD have some combination of the two.”

While COPD can be caused or aggravated by environmental pollutants, some 80 to 90 percent of all cases are the result of smoking.

“About a third of smokers develop significant COPD, another third get it very mildly, and a third don’t have it at all,” said Dr. MacIntyre. “Obviously, the more you smoke, the more likely you are to develop COPD. But there is obviously a genetic component that determines your susceptibility to the disease that researchers are still trying to tease out.”

Ironically, said Dr. MacIntyre, even though the number of American adults who smoke has declined in recent years, the death rates for COPD are still on the rise. “People who took up smoking in the 1950s and 1960s are now hitting their 50s and 60s; the damage is done.” Importantly, however, “If you stop smoking, while existing lung damage may not reverse, future lung damage can be prevented.

“As the lung continues to age, it loses function over time as a normal part of aging. Most of us don’t lose enough to cause serious damage. But if you’ve damaged lung tissue in your 30s and 40s, you can start developing symptoms of COPD in the decades that follow.”

COPD is a leading cause of death and disability in the United States and affects somewhere between 10 million and 25 million Americans -- many times the number of people with lung cancer. It can be easily diagnosed with an X-ray and a pulmonary function test. Yet awareness of the disease is low -- in part, perhaps, because it comes on gradually.

“COPD doesn’t hit you over the head,” said Dr. MacIntyre. “First you notice you’re out of breath when you get to the top of stairs. Then you get winded halfway up the stairs. Then, after awhile, you can’t even walk around the room without feeling short of breath. The progress of the disease is slow and insidious, unfolding over several years or even decades.”

Left untreated, COPD continues to damage the lungs -- sometimes to the point that, said Dr. MacIntyre, a case of pneumonia or even a chest cold can be fatal. “But even though the disease is progressive and irreversible, it doesn’t have to become so severe,” he pointed out. “The sooner you address COPD, the more you can improve your quality of life.”

Smoking cessation, of course, is job number one for people with COPD -- or should be. Yet, surprisingly, most smokers who are diagnosed with COPD don’t quit smoking even after they find out they have the disease.

“COPD is not a dramatic near-death experience like a heart attack, which can be a very effective stimulus to quit smoking,” said Dr. MacIntyre. “But COPD does get worse and worse, and more and more debilitating, if you don’t quit.

“Many COPD patients complain about their symptoms, yet insist that they can’t or won’t quit smoking. I tell them the best way to get out of a hole is to stop digging.”

According to Dr. MacIntyre, there are some promising drugs available for people with COPD, including a bronchodilator that lasts all day long (rather than the standard inhaler-delivered medications, which wear off after four to six hours). Steroids to reduce inflammation can also be helpful; oxygen supplementation is often essential.

One of the most important keys to living better with COPD, says Dr. MacIntyre, is a good pulmonary rehabilitation program. “When people get breathless, they don’t exercise,” he pointed out. “Then their lungs get deconditioned and it becomes a vicious cycle. So rehabilitation is an essential component of a comprehensive, effective approach to COPD.

For people with certain types of severe emphysema, a surgical procedure known as lung volume reduction surgery (LVRS) has been shown to improve survival and quality of life. During LVRS, surgeons remove a diseased portion of the lung, allowing healthy lung tissues to expand and function better.

With its benefits confirmed in a recently completed large-scale trial known as NETT (National Emphysema Treatment Trial), LVRS is now reimbursed by Medicare and a growing number of health plans when performed at approved medical centers, including Duke.

“LVRS can improve a patient’s ability to take a deep breath and to exercise,” said Duke thoracic surgeon Thomas D’Amico, MD, who worked closely with Dr. MacIntyre on Duke’s participation in the NETT study. “The surgery can also decrease the need for oxygen. This means that patients who use minimal to moderate amounts of oxygen may be able to get along without it entirely -- a big quality of life improvement.”

LVRS is not a substitute for pulmonary rehabilitation; in fact, patients who undergo the procedure must commit to six weeks of rehabilitation before the surgery and, afterward, keep it up for the rest of their lives. Because of various medical criteria for the procedure, only about half of the patients Dr. D’Amico sees are eligible for it. Those who do receive it, however, often experience dramatic results.

“We get letters, cards, and photos from patients telling us we saved their lives,” he said. “We haven’t really cured anything; they still have the disease. But they do feel better.”

Despite his patients’ enthusiastic response to LVRS, however, Dr. D’Amico would be just as happy to not have to perform the operation at all. When asked about the most important next step in the battle against COPD, this highly experienced surgeon focuses not on new techniques or technologies, but cuts right to the heart of the matter: “We need to get a whole lot better at helping people stop smoking.”

In addition to LVRS, lung transplantation is also performed at Duke for a small number of relatively young patients with severe COPD.

Duke is currently conducting research on COPD treatment and diagnostic options. People interested in volunteering for the study should contact Stephanie Keeting, RN, at 919-613-6306. 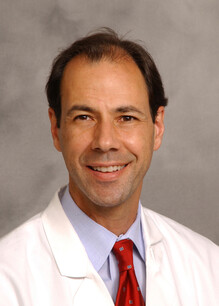 Why It’s So Hard to Quit Smoking
By Samiha Khanna

Monoclonal Antibody Treatment Available for Eligible People...
By Debbe Geiger
Back to Top