To find out whether Laura Kirby had thyroid cancer, her Duke surgeon performed robot-assisted surgery through an incision under her arm. Hear from Kirby and get a look at the robot in action in the video below.

“I have two young children, and it was important for me to take care of myself,” said Laura Kirby, 38. “If there was any indication that I did have cancer, then I wanted it taken care of and removed.”

Kirby, a Raleigh mother of two boys, had nodules, or lumps, on her thyroid. The thyroid is a butterfly-shaped gland at the front of your neck. It produces hormones that help regulate many of your body’s functions—including heart rate and digestion. Thyroid nodules can be cancerous, although it’s rare.

To get more information, Kirby’s doctors ordered a biopsy. That’s when tissue samples are drawn from thyroid nodules with a fine needle and tested.

“The needle biopsies showed that, in one of the thyroid nodules, there was a risk of thyroid cancer,” said Duke endocrine surgeon Dr. Michael Stang, MD. “It showed a mutation, which increased her risk of cancer—which we would have otherwise normally predicted to be only 5 to 15 percent. So, it was clear she needed surgery.”

Dr. Stang told Kirby she had options for the surgery. Typically, thyroid surgery involves an incision on the front of the neck, often located in a natural fold to minimize the scar. But Dr. Stang also offered her a newer technique, in which he would access Kirby’s thyroid through an incision under her arm. The surgery would be robot-assisted, meaning he would perform it by controlling the precise movements of tiny handlike instruments inserted under her skin through small incisions. High-definition 3D images would allow him to zoom in and get a detailed view as he worked.

“When he said that, I was shocked,” Kirby said. “I couldn’t believe that that was an option.” But as she thought about it, the option seemed right for her. Avoiding a visible scar was one reason. “It was nice to know that I didn’t have to have a cut in my neck,” she said. Another was the ability to limit her children’s exposure to her medical treatment. “I liked the idea that my children didn’t have to see this wound that was healing for several weeks,” Kirby said. “It was something that I could privately take care of.”

Dr. Stang, who has performed the technique on hundreds of patients since he began using it in 2010, performed Kirby’s surgery in March 2016 at Duke Raleigh Hospital. “Thankfully, the nodule was in the 15 percent that are benign. So she had great news,” Dr. Stang said. “Visibly, you cannot tell that she ever had thyroid surgery.”

Kirby is also pleased—with both the news that she didn’t have cancer and the cosmetic result. “I do have a scar under my arm, but it’s under my arm and no one can see it but me,” she said. She also appreciated having access to this new technique close to home. “It was so nice to have it at Duke Raleigh,” she said. “It’s literally 15 minutes from our house, so I was able to just get up in the morning and head to Duke Raleigh, and easily come home that evening.”

Dr. Stang noted that not every patient is a candidate for this approach. “The robotic thyroid surgery is really geared toward those who have either a low-risk, contained thyroid cancer, or a nodule we don’t completely know whether it’s a cancer or not,” he said. A person’s physical size—in particular, the distance between your underarm and your thyroid—can also be a factor in whether or not you are a candidate for robot-assisted surgery. 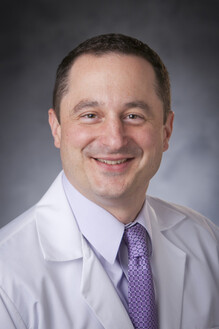 New Treatment Guidelines for Thyroid Cancer Finds Less May Be...
By Angela Spivey