A Duke study finds patients who need their thyroid gland removed should seek surgeons who perform 25 or more thyroidectomies a year for the least risk of complications.

Patients who need their thyroid glands removed should seek surgeons who perform 25 or more thyroidectomies a year for the least risk of complications, according to a Duke study.

How Many Thyroidectomies Does Your Surgeon Perform Annually?

Thyroidectomy is one of the most common operations in the U.S. It's often performed due to cancer, overactivity, or enlargement of the thyroid gland, which is located at the base of the throat and produces hormones that regulate metabolism. But you might be surprised to learn that about half (51 percent) of surgeons who perform thyroidectomy do so just once a year, according to a study published in the Annals of Surgery.

“This is an operation that requires technical expertise, and patients should ask their surgeons how many procedures they do each year,” said Randall Scheri, MD, Duke endocrine surgeon. “Surgeons should report their case numbers. Choosing a more experienced surgeon does not completely avoid complications but certainly can improve the odds that the patient will do well.”

Although total thyroidectomy is generally safe, it can cause life-altering complications that were seen in some study patients, such as bleeding, problems with the parathyroid glands, and damage to the laryngeal nerve that can lead to difficulty speaking, breathing, and swallowing. Any complication can require more care, driving up patient costs and potentially compromising quality of life.

The study evaluated data from 16,954 patients who had thyroidectomies between 1998 and 2009 and were enrolled in a national database from the Health Care Utilization Project.

In analyzing the case volumes of 4,627 surgeons, researchers found an association between the number of procedures surgeons performed each year and rates of complications. Notably, patients of surgeons who performed fewer than 25 thyroidectomies a year were 1.5 times more likely to experience complications.

As the average number of cases increased, the risk of complications for patients steadily decreased. Risks leveled out for surgeons who performed an average of 25 or more operations a year.

“Thyroid nodules, which can give rise to thyroid cancer, are a significant health issue in patients of all ages,” Dr. Scheri said. “Studies have revealed that more than 50 percent of healthy adults may have thyroid nodules, many of which are identified on radiological studies obtained for other reasons. Thyroid nodules are less common in children but are more likely to be malignant.

“Surgeon-volume is one factor that should be considered when selecting a surgeon. On average, high-volume surgeons had better outcomes associated with reduced health-care costs.”

Related: NY Times - "Choose a Thyroid Surgeon Who Does Dozens of Operations a Year" 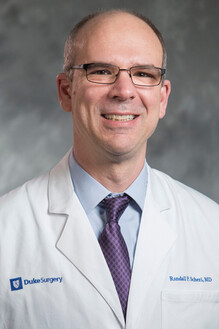