A new surgical technique is changing the game for kids and adults with a congenital heart defect that often requires several major surgeries. Compared with the traditional procedure, the new, minimally invasive approach dramatically cuts recovery time and is better tolerated.

Infants born with pulmonary valve stenosis (one of four congenital heart defects that together are called tetralogy of Fallot) usually need one or two major heart surgeries within the first few days to six months of life. Years later, these children will likely need to have their pulmonary valve completely replaced.

Traditional surgery requires breaking the breastbone and cutting from the sternum to just above the abdomen. This procedure is called a sternotomy. About six weeks of strict movement restrictions are required while the bones and incisions heal. Instead, Turek makes a small, two-inch incision on the left side of the chest between two ribs. No bones are broken, which means healing is much faster.

“From what we have seen internationally, we’re the only center in the world offering this,” Turek said. “The beauty of this approach is that it lets people get back to normal activity much sooner. It’s an easier process for them.”

Few surgeons would consider using this approach in people who have had previous complex heart surgeries. That’s because scar tissue makes it difficult to operate through such a small opening. For Dr. Turek’s method, the heart-lung machine (which maintains blood circulation outside of the body during surgery) is connected to blood vessels in the groin instead of the heart. This relaxes the heart and creates more space for the surgeon to remove adhesions caused by previous surgeries.

“People think these types of minimally invasive operations can’t be done in these cases,” Turek said. “But we’ve figured out how to do it and how to do it well. It’s really neat to see a kid get back to playing sports just weeks after heart surgery.”

This surgical approach can also be used for other pulmonary valve procedures, but it is not ideal for people who are morbidly obese or who have pulmonary artery conduits (surgically placed tubes that help supply blood flow to the lungs).

Facebook Twitter
Ready for an Appointment?
call us at
919-681-2343
Doctors Featured in this Article
Featured Doctors Images 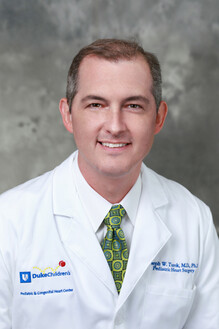 How to Evaluate a Pediatric and Congenital Heart Surgery...
By Morgan deBlecourt

Advances in Norwood Procedure Lower Risk in Babies with...

Know Your Stroke Risk, Know the Signs of Stroke
Back to Top