Lucas Quinones-Reed credits his dad's perseverance for his ultimate diagnosis of a rare autoimmune disease.

After four years searching for a diagnosis for his violent behavior, Lucas Quinones found treatment for his autoimmune disorder at Duke. Today, the 19-year-old is planning to attend college, and making plans for his adult life.

Lucas and his sister spent nearly half their lives in a Brazilian orphanage before they were adopted by Jack Reed and Ruben Quinones, now of South Florida. Reed and Quinones looked forward to helping to guide their son, then 9, and daughter, 11, through all the joys and trials of life.

The first five years as a family were “normal,” said Reed. Lucas was a typical kid with boundless energy. But shortly after Lucas turned 14, life shifted in a way they never could have prepared for.

Lucas started showing symptoms of anxiety, which escalated into something else. “He began having violent episodes,” said Reed. “He destroyed the house. He jumped out of moving cars and broke ribs. When he would start walking in circles around the house, we knew we were in for a rough night. Even the dog sensed something and would become very scared,” said Reed.

Reed, who has an advanced degree in psychology, didn’t know what caused these episodes, but he knew “it looked like psychosis,” he said.

When Lucas was in eighth grade, the family was sitting in church when he began trembling and drooling. His body became stiff, and he couldn’t talk. Lucas’s parents took him to children’s hospitals near their home in South Florida. Thus began an incomprehensible, four-year journey from hospital to hospital in several East Coast states. The family moved to be closer to hospitals they hoped would help. More often than not, Lucas ended up as an inpatient in the hospitals’ psychiatric wards.

Reed’s background and instincts told him his son’s issues were neurological, not psychological. “We begged, ‘please test him, my kid is having seizures’” said Reed. Tests were either not performed, or inconclusive.

In one year, Lucas was placed in nine psychiatric wards. One lasted only a week. “He was kicked out because he destroyed the camp during a violent episode,” said Reed.

Lucas had trouble speaking, walking, and reading. Testing showed his IQ had plummeted. He couldn’t figure out how to close the pizza box. This, after being named Student of the Year in his first year at his first U.S. school.

“We were seeing doctors in Washington, DC, and they told us we were going to lose him, but that they couldn’t help.” said Reed. “They said, ‘Go to Duke.’” They did, immediately. Lucas had been sick for four years at this point.

Reed, Quinones, and Lucas met with Dr. Heather Van Mater, MD, a pediatric rheumatologist and Dr. William Gallentine, DO, a pediatric neurologist. “They came in with a box full of medical records,” said Van Mater. Immediately, she saw red flags — including the seizures and the sudden drop in IQ — that didn’t fit with a psychiatric diagnosis.

After test results were reviewed, the diagnosis was confirmed: Lucas had Hashimoto encephalopathy, a rare, and often misdiagnosed autoimmune disorder that causes brain inflammation.

“The psychological symptoms with this disorder can be so prominent that it is hard to see beyond that,” said Van Mater. “Some patients don’t have the classic signs of brain inflammation, so it is difficult to diagnose.” Even when imaging of the brain is performed, the inflammation doesn’t always show up.

An "All-in Approach" to Care

Duke Children’s Hospital has a clinic especially for patients like Lucas. Specialists in autoimmune disorders and neurology work side by side with psychiatrists, and meet with the patients at the same time. Van Mater calls it an “all-in approach.”

“It is traumatic for the family to re-tell the story of what they’ve been through, so we want them to only have to tell it once,” explained Van Mater.

Lucas was treated with steroids, plasmapheresis to remove antibodies, and an immunosuppressant to “reset” his immune system. He stayed at Duke as an inpatient for six weeks. “They saved his life,” said Reed.

Lucas agreed but thinks credit goes to his father first. “If it weren’t for him, I wouldn’t be alive. He kept questioning, he kept researching.”

Ready to Help Others

Today, Lucas is 19 years old, a high school graduate, and will soon start classes at Broward College in Fort Lauderdale. “I want to be a firefighter, or a therapist, or maybe a researcher,” he said. “I believe that everything happens for a reason. I haven’t figured out all the reasons for what I went through, but I know that I want to help people.” 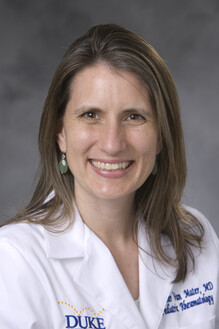 Why Children Should Wear Face Masks
By Larissa Biggers

Is Blepharoplasty (Eyelid Surgery) Right for You?
By Larissa Biggers
Back To Top