A catheter is used to insert a small balloon through the nose to open a blocked Eustachian tube.

Inserting a small, balloon-like device in a blocked eustachian tube can bring relief to children and adults who suffer from chronic eustachian tube dysfunction. Duke ear nose and throat doctors – the first otolaryngologists in North Carolina to use the Aera system – say it has the potential to significantly reduce the need for ear tubes and other ear surgeries. 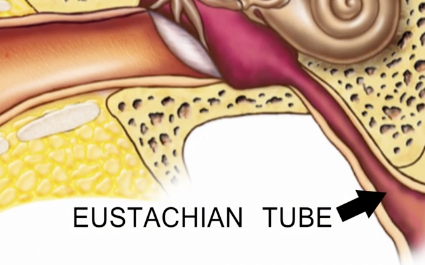 The eustachian tube is the main connection between the back of the throat and the middle of the ear. Normally, the tube is filled with air and opens when yawning or chewing. “This allows you to equalize pressure” on either side of the eardrum, explained David Kaylie, MD, a Duke otolaryngologist. When the tube is blocked from a cold, sinus or nose problems, or ear infections, air can no longer pass through. Stuffy ears and noses, hearing loss, ear pain and pressure, as well as ringing in the ears (tinnitus) can result.

“This new device has been shown to return the middle ear to normal and greatly eliminate middle ear pressure in properly selected patients,” he said. Studies of the device showed “long-term normal eustachian function after the procedure.”

Still, Kaylie believes it will be a significant advance for millions of people who require ear tube surgery. “There are people who need tubes 13 or 14 times,” he said. “Every time the tubes come out, they need the tubes in again. There is a huge need for this procedure, and it will greatly reduce the need for all those ear tubes” and other related surgeries.