Shirley Mims thought she would go blind when she was first diagnosed with uveitis. A clinical trial at Duke for a drug now approved by the FDA to treat uveitis helped her see clearly again.

Shirley Mims was driving home from her job as an executive with Target nearly four years ago when her vision became clouded by starbursts and spots that resembled “oil dropped in water.”

“That’s all I could see,” said Mims of Fayetteville. “It scared me so bad.”

Still seeing spots the next day, Mims went to her local eye doctor, who referred her to a nearby specialist. Within two days, Mims had an appointment with Dr. Glenn Jaffe, MD, a retinal specialist at Duke, who diagnosed Mims with uveitis.

The rare group of diseases causes chronic inflammation in the front, back or middle of the eye. Uveitis can start suddenly or develop gradually. Symptoms can include pain or redness in the eye, sensitivity to light, or seeing black spots or “floaters.”

Often the exact cause of uveitis is hard to determine. It may be caused by an infection or trauma to the eye. Or it may be associated with an autoimmune disease that affects the whole body, such as sarcoidosis or multiple sclerosis. Uveitis requires comprehensive medical care to prevent irreversible vision loss.

Duke is one of the few eye centers in North Carolina to offer a comprehensive approach to managing uveitis. Its uveitis clinic has a rheumatologist on-site each week to manage systemic immunosuppression drugs if they are required, and people with uveitis also have access to experts in glaucoma, cataracts and retinal disease. This allows people to see all appropriate specialists in one convenient location and experience a cohesive coordination of their care.

Dr. Jaffe started Mims on oral steroids, the most common uveitis treatment. When Mims' vision didn’t improve within six months, Dr. Jaffe recommended she participate in the first clinical trial of adalimumab (Humira), which was being tested, at the time, as a potential new treatment for uveitis. Adalimumab is a biologic, which controls inflammation by blocking specific proteins in the body. It is also used to treat arthritis, Crohn’s disease and several other autoimmune conditions.

Humira became the first and only FDA-approved non-steroid treatment for noninfectious uveitis in June 2016. This is an important advance in the treatment of noninfectious uveitis because long-term steroid use often leads to cataracts and glaucoma in uveitis patients. Because Humira doesn’t have the same side effects as steroids, it can be safely used to control the chronic inflammation associated with uveitis.

“The goal of the clinical trial was to determine whether Humira is a safe and effective alternative that could replace or minimize the use of steroids,” Dr. Jaffe said. “There are pros and cons to all of the treatments that we use, so we always need to reach a balance. And because uveitis is not just one, but rather a group of several different diseases, treatment must be highly individualized—not only by disease type and severity, but also with regard to the patient’s other health factors.”

Desperate for relief, Mims agreed to try Humira. Her vision had deteriorated to the point that she had to retire from her job at Target.

Humira is self-administered at home via an injection under the skin, typically every two weeks. “It’s not normal to stick yourself,” said Mims. “But when you weigh both sides—either do the injections or risk losing your eyesight—you learn to stick yourself real quick.”

Mims’ condition improved within three months of starting Humira. Three years later, Mims is still on Humira and her condition is considered “quiet” which means her uveitis is well controlled.

The results have been life-changing. At 62, Mims considers herself “a 42-year-old at heart.” She has taken up ballroom dancing, and enjoys traveling—especially going on cruises. She also started working part time again.

“Dr. Jaffe is a lifesaver,” she said. “I had gotten to the point where I didn’t know what to do because I couldn’t drive or work. Dr. Jaffe turned my life around. I plan to do everything now. I thought this disease was going to take my vision, so to go from that to where I am now—it’s like night and day. It’s amazing.” 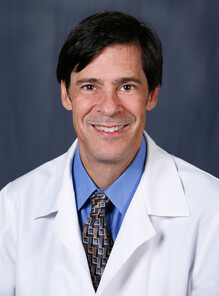 Weigh the Benefits of the COVID-19 Vaccine Against the Risk...
By Debbe Geiger
Back To Top