Teresa Cumbie’s liver cancer was so rare that her Myrtle Beach, SC oncologist had never seen anything like it. After her biopsy samples were sent for medical opinions around the country, she was diagnosed with hepatic epithelioid hemangioendothelioma (HEHE). Armed with that knowledge, Teresa started looking for doctors experienced with her condition. She found them at Duke University Hospital in Durham. Today, thanks to a successful liver transplant, she’s cancer-free.

Cumbie’s symptoms seemed routine when they started in June 2018. Her abdominal pain was attributed to scar tissue from a previous gall bladder surgery; her back pain was thought to be a recurrence of former back problems.

When the pain didn’t go away, Cumbie had a CT to look for kidney stones. Instead, Cumbie said, “they found that my liver looked really bad.”

More testing, including the biopsy that went around the country, resulted in her unusual diagnosis. “I was deflated,” Cumbie recalled. “I thought, ‘they don’t know anything about this problem because it’s so rare.’”

After conducting her online research, Cumbie made an appointment at Duke. One month later, she met with medical oncologist Richard Riedel, MD. He spent an hour explaining her condition and test results. “It just floored me that a doctor would take that much time,” she said.

Unfortunately, Cumbie soon learned the cancer had replaced much of her liver tissue, and she had little liver function left. She returned home on pain medications.

“I was very lucky to get the transplant so soon. That is one awesome hospital."

Cumbie’s condition went from bad to worse over the next few months. “I was getting weaker and weaker, and I felt like I was fading fast,” she said.

When she returned in October for her scheduled visit, she was immediately admitted to the hospital. The Duke specialists performed an emergency evaluation and determined her tumor had enlarged. Her only option was a liver transplant. The Duke transplant team listed Cumbie for a liver transplant just seven days after her evaluation, a remarkably short time. Transplant evaluations can often take weeks elsewhere.

Doctors use the MELD (Model for End-State Liver Disease) score to determine how sick patients are. The range is 6 to 40. The higher the number, the more urgent the need for a transplant. Cumbie’s MELD store was 35. She had hours or days to live without a transplant.

Cumbie received the new liver just 15 days after she was listed.

“We treat very, very sick patients,” said Debra Sudan, MD, the surgeon who performed Cumbie’s liver transplant surgery. She credited Duke’s technical expertise and the specialists’ medical knowledge as key reasons why even the most critical patients do well following transplant surgery. The team’s cohesive approach to patient care is also an important factor, she said.

“We have very good cooperation between our medical and surgical colleagues,” Sudan said. “And because we’re very detail-oriented we can prevent complications or treat them quickly.”

“I was very lucky to get the transplant so soon,” she said. “That is one awesome hospital." 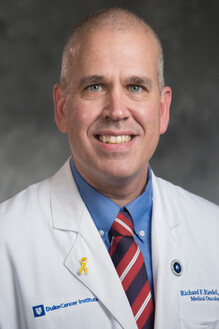 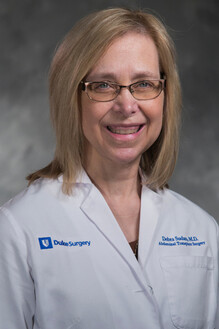 Monoclonal Antibody Treatment Available for Eligible People...
By Debbe Geiger
Back to Top