Carrie Hollander was just 31 years old when she was diagnosed with heart failure. Within three years, she needed a heart transplant. Since she was not a candidate for a transplant at a hospital closer to home, she went to Duke where she received a new heart just nine days after being added to the waitlist. Two years later, Hollander’s mother also received a heart transplant at Duke. Today, mother and daughter are both healthier than they’ve been in years and are grateful for the time they can spend together.

In the Fall of 2015, Carrie Hollander was at work when she started having chest pain, became short of breath, and felt hot. After going home to check on her then 13-year-old son Dustin, she drove herself to a local emergency room in Spartanburg, SC. “That day changed my entire life,” she said. Hollander learned she had heart failure and atrial fibrillation (an abnormal heart rhythm). She was admitted to the hospital and had to stop working. A few days later she left the hospital with a hefty medication regimen and a wearable defibrillator to keep her heart rhythms in check.

In October 2016, shortly after she moved to North Carolina, a pacemaker and defibrillator device was surgically implanted in Hollander’s chest. Within a year, because of deteriorating heart muscle, one of her heart’s valves was leaking severely. Her pacemaker wasn’t keeping up, but she was too weak for another surgery. She started an intravenous medication called milrinone to improve her heart’s pumping ability. What she really needed was a heart transplant, but she was turned down by a nearby hospital.

By January 2018, Hollander’s heart failure doctor in Asheville, NC, knew she needed more advanced care. Dr. Benjamin Trichon trained at Duke and knew they had the expertise to handle a case like Hollander’s. Trichon called Dr. Chet Patel, a Duke transplant cardiologist, who agreed to take her case.

When Hollander arrived at Duke, she underwent a thorough heart transplant evaluation and was ready to be added to the transplant waitlist. When an insurance issue caused a delay, she went home only to land back in the hospital in Asheville. Dr. Trichon told Hollander they were out of time. “I will never forget the look on his face,” she said.

Within an hour she was wheeled back for a procedure to implant a balloon pump that would help her heart circulate blood. Shortly after the procedure, Hollander was transported back to Duke.

Getting the Good News

Once Hollander’s insurance approval came through, she was officially listed for a heart transplant. Just nine days later, she got the call she’d been waiting for. Since she couldn’t take her glasses with her as she was prepped for surgery, she recalls being disoriented and scared.

“All of a sudden I heard, ‘Carrie, it's Dr. Schroder. Do you remember me? Follow my voice. I'm going to be in here with you, okay?’” Hollander said. Duke heart transplant surgeon Jacob Schroder, MD, had performed a previous surgery on Hollander and would be assisting during the transplant surgery. “I was comfortable with him, and I was so glad to hear a familiar voice.”

It normally takes about 24 hours for heart transplant recipients to wake up after the surgery, so everyone was surprised when Carrie was awake just three hours later. She was walking the halls within days and was soon walking extra laps. At one point she was walking two-and-a-half miles a day. Her nurses and doctors nicknamed her “speedy.”

Daughter Gets Better While Mom Gets Sicker

While Hollander went back to Asheville to complete cardiac rehab and recuperate, her mother Peggy Giambalvo, who had been diagnosed with heart failure in 2012, was getting sicker. It’s not uncommon for heart failure to run in families, according to Dr. Schroder. Giambalvo had also been turned down for a heart transplant by her local hospital, and her family was losing hope.

Hollander knew her mom needed to go to Duke. She made a call to her medical team, and Giambalvo was soon admitted to Duke. After just 35 days on the heart transplant waitlist -- plus a balloon pump surgery and a short time on lifesaving ECMO (extracorporeal membrane oxygenation system) therapy -- Giambalvo received her transplant in April 2020. Drs. Patel and Schroder were part of her care team as well.

These days, Hollander and Giambalvo are staying active and taking advantage of their renewed strength. Hollander and her long-time boyfriend Wes recently hiked in Rock City, TN. “I felt good, and I got to walk the whole entire thing. That was something special to me,” she said. 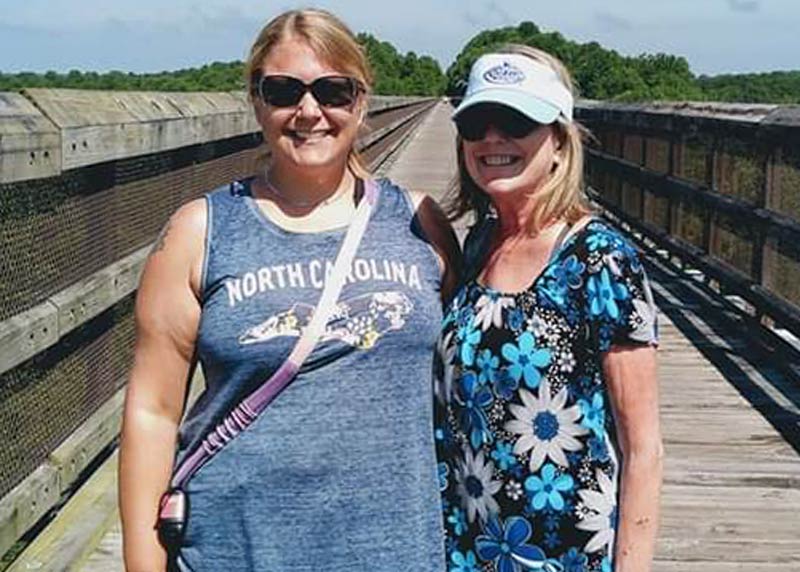 Dr. Patel stressed how important it is for patients to continue advocating for themselves and searching for options at centers like Duke. “We are a program that is pushing boundaries and using cutting edge technology to utilize a greater number of donor hearts for more people who need these life-saving organs.”

Above: Carrie with her mom Peggy in June 2020 at High Bridge State Park in Virginia.

Can a New Device Make More Hearts Available for Transplant?
By Debbe Geiger
Do I Need a Heart Failure Specialist?
By Morgan deBlecourt
Advances at Duke Fast-Track Second Heart Transplant for...
By Morgan deBlecourt and Erin Hull
Duke Surgeons First in U.S. to Place New-Generation Artificial...
Back to Top