David Deitz can once again enjoy walks on the beach

Ankle pain kept David Deitz from enjoying retirement on the North Carolina shore. After ankle replacement surgery at Duke, he’s walking on the beach once more.

When David Deitz retired a few years ago, he and his wife moved from upstate New York to Havelock, near North Carolina’s Crystal Coast. “We love the shore,” he said. “We wanted to retire someplace where we could walk on the beach.”

Unfortunately, walking on sand -- or any uneven ground -- became more and more difficult for Deitz, who had suffered a broken ankle in a 2010 motorcycle wreck. “It just was too painful to do,” he said. “Even something as minor as taking my dog for a walk was very painful.”

The steroid injections he was getting for his ankle pain were helping less and less. “Initially, the injections were once every year, then it was once every six months, then every three months,” he said. Eventually, “every day was a bad day.”

Get a Second Opinion

Get a virtual second opinion from a Duke ankle specialist.

His doctors back in New York had offered him two other options to relieve his pain. One was ankle fusion, in which the ankle joint is locked in place with screws, plates, and bone grafts. Ankle fusion relieves pain, but it also limits your ankle’s range of motion. The second option was ankle replacement surgery, in which the ankle joint is replaced with a prosthetic one made of metal and plastic. It allows a wider range of motion and enables you to return to an active lifestyle.

At first, Deitz said, he wasn’t sure about ankle replacement. “But as time went by, and I kept having more and more pain, I started doing some research on it. I got to the point where I just said, ‘I can’t take this anymore.’ So I made the appointment.” His doctor referred him to Duke foot and ankle orthopaedic surgeon Mark Easley, MD.

Deitz had ankle replacement surgery in October 2015 and is pleased with the outcome. “I couldn’t be more happy with the end result,” he said. “It’s excellent.” Today, he has full range of motion with his new ankle and has returned to activities he abandoned when the pain got too bad. “I used to walk a lot, and I used to ride a bike about 10 miles a day,” he said. “Now I can do those types of things again. And we can walk on the beach.” 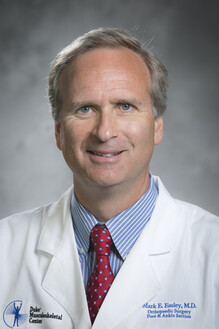 Back to Dancing After Double Ankle Replacement (Video)
By Erin Hull