All Juanita Grant remembers is talking on the phone in her Danville, VA, apartment. Then she woke up at Duke University Hospital and learned she’d had a stroke.

That’s not how it sounded to her friend Mary Dudley, who was on the other end of the phone call. Dudley, a retired radiology nurse, heard slurred speech—then nothing. “I knew she was having a stroke and that something had to be done right away in order for her to survive,” said Dudley. She called another friend, Beth Collins, who lives closer to Grant.

“I hauled freight to Nita’s apartment,” said Collins. “Good thing the police weren’t out.” Collins found Grant slumped over in her chair, eyeglasses on the floor and the phone receiver dangling.

A rescue team took Grant to Danville Regional Hospital, a partner in the Duke Telestroke Network, where both friends joined her. “She was paralyzed on the left side and she was all drawn,” said Dudley.

See the telestroke robot in action

Bedside stroke assessment from miles away

The friends could tell Grant’s situation was grave and began quietly discussing how they might have her transferred to Duke. Just then, the telestroke robot—a remote-controlled wireless cart with two-way teleconferencing capability—rolled into the room. Duke neurologist Carmelo Graffagnino, MD, appeared on the robot’s monitor, beaming in from Durham, an hour’s drive away.

Grant doesn’t recall the high-tech consultation, but her friends remember it clearly. “The doctor asked the nurse to hold up Juanita’s left arm and then let it go. It dropped like a piece of spaghetti,” Dudley said. They also remember Graffagnino saying their friend needed an advanced procedure that couldn’t be performed in Danville; she’d need to be flown to Duke.

A CT scan taken at Danville Regional—which Graffagnino was also able to read remotely—had shown that Grant had a sizable clot blocking blood flow to her brain. The Danville emergency team gave her the clot-dissolving drug tPA, then put her on a Life Flight helicopter to Duke.

RELATED
Know the Signs of Stroke - BE FAST

When she arrived, Duke neurosurgeon Ali Zomorodi, MD, and his team were standing by, ready to perform a thrombectomy. This relatively new procedure can restore blood flow to the brain when tPA alone isn’t enough. The neurosurgeon threads a small, flexible tube called a catheter through an artery in the leg to the brain. A wire cage-like device called a stent retriever at the end of the catheter snags the clot and pulls it out. Thrombectomy is only performed at a few hospitals in the region, including Duke University Hospital and Duke Raleigh Hospital.

By the time Dudley and Collins arrived by car, the thrombectomy was over and Grant, although tired and weak, was functioning nearly normally. Her friends were astonished. “She could move her left side and her fingers, and her face wasn’t drawn,” said Collins. “It was that quick,” said Dudley. “I’d never seen anything like it.”

After a few days at Duke, Grant returned home to Danville, where she’s now feeling well. A speech pathologist is helping her manage her only after-effects of the stroke, which include minor difficulties with speech and swallowing.

She’s thankful for the Duke Telestroke Network and Danville Regional’s participation in it. “I probably wouldn’t have made it without it,” she said.

Graffagnino notes that the telestroke technology was just one of many critical elements that came together in Grant’s favor. “Her friends had the wisdom to call 911, which is the most important thing we can teach folks,” he said. “She got to the Danville emergency department, which is connected to us. So, in essence, Duke was in her community. She got the clot buster, plus she was able to be transferred here so Dr. Zomorodi could use his expertise to pull the clot out. Then she was cared for in intensive care by the stroke team, myself and our nurses. It’s really an amazing example of a village.” 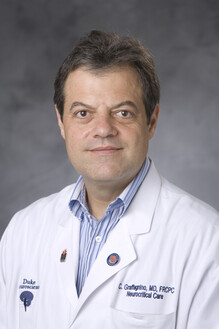 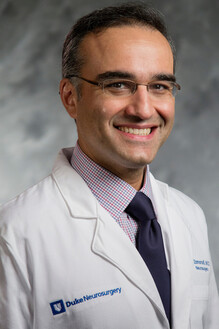