It seemed like laryngitis at first. But after weeks of trouble talking and breathing, a local veterinarian got the diagnosis—vocal cord paralysis—and treatment he needed.

Durham veterinarian Michael Grafinger, DVM, isn’t your average vet. In addition to providing emergency and specialty care to family pets, he donates his time and skills to caring for injured wildlife like big cats, bald eagles and sea turtles. But a while back, it was Grafinger himself who needed medical help.

“I just woke up one morning with no voice,” he said. “My son had contracted a summer cold, so I thought I must have laryngitis.” An active runner, skier and father of three young boys, Grafinger also began having trouble breathing during exercise. “I just couldn’t get the air I needed when I was running.”

His primary care doctor prescribed steroids, antibiotics and a proton pump inhibitor, medication used to treat acid reflux. None of those helped. Then he saw an ear, nose and throat doctor (otolaryngologist) who found a cyst on a vocal cord but wasn’t sure that was the cause of his problems.

Meanwhile, the situation was getting more and more frustrating. “Clients couldn’t understand me on the phone,” said Grafinger. “I reached a point where no one could understand me, frankly.”

Duke specialist scopes out the cause

“Dr. Cohen inserted a scope through my nasal passage and gave me a diagnosis in five minutes,” Grafinger said.  One of his vocal cords was paralyzed.

The vocal cords are two folds of tissue in your larynx (sometimes called your voice box), the hollow, muscular tube through which you breathe, talk and swallow. The vocal cords meet in the center, creating a slitlike opening that opens when you breathe and closes when you speak. Air passing between the closed cords causes them to vibrate, which creates sound. Because Grafinger’s paralyzed vocal cord couldn’t move to the center to meet the healthy one, he couldn’t produce sound.

After a CT scan showed that the problem wasn’t the result of a tumor in a nerve or cancer in Grafinger’s head, neck or lungs, Cohen performed a procedure, called laryngoplasty, to repair the paralyzed vocal cord. He injected collagen—a protein found in our bone, skin and other connective tissue—into the paralyzed cord. That shifted the cord to the center, where it could make contact with the healthy cord and restore his ability to speak and breathe normally.  Cohen injected the collagen through the neck while Grafinger was awake, a newer treatment approach that avoids the cost and risk for complications of general anesthesia.

“Unfortunately, patients experiencing larynx symptoms may suffer unnecessarily because of misdiagnosis before they consult a specialist,” said Cohen.

Vocal cord paralysis can be caused by thyroid or lung surgery or by having a breathing tube inserted during another medical procedure. But in about one in five cases—including Grafinger’s - the cause is unknown. Untreated, it can take a year to improve.

“After a few days, I was back to normal,” Grafinger said. “My exercise tolerance improved. My voice returned.”  Follow-up visits with Cohen have shown that Grafinger has continued to improve, with no further medical concerns.

Today Grafinger is happily back to an active lifestyle—and back to speaking on the phone with his clients (the two-legged ones, that is). 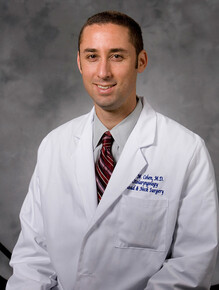 5 Steps to Keeping the Aging Voice Healthy
By Morgan deBlecourt

Vocal Pacing
Back To Top