After two successful arthroscopic surgeries at Duke, Lieutenant Colonel Todd Turner is pain-free and ready for his next assignment.

Colonel Todd Turner, 43, is used to physical wear and tear. A helicopter pilot in the U.S. Army for more than 20 years, he led soldiers at the platoon level and up to the battalion level while serving in the Pacific, Europe and Afghanistan.

But Turner’s time playing football as a cadet at the U.S. Military Academy at West Point probably dealt his body its worst blows. In the early 1990s, he suffered ACL tears in his right knee that required two surgeries. “We played on artificial turf due to the weather there,” he said. “That’s like playing on concrete.” He also took a hit on his right shoulder, which tore his rotator cuff.

Two decades later, the pain from Turner’s past injuries had grown worse. “I’ve been dealing with pain for 20 years,” he said. “I was always able to push through it. But I’d begun having so much pain in my knee and shoulder it was keeping me up at night.”

Last year, Georgia-based Turner spent a year living in Cary and studying at Duke’s Sanford School of Public Policy. It seemed like the perfect time to have his damaged joints repaired. Between moving his family from one place to another and frequent deployments, “you don’t have time for yourself,” he said. “With my schedule as a student, I knew I could do the rehab.”

RELATED
Know When to See a Doctor for Shoulder Pain

Turner sought out Duke orthopaedic surgeon Andre C. Grant, MD, who specializes in sports medicine ranging from fracture care to ACL reconstruction. “I call it sports ‘trauma’—anything from the neck down that occurs during sports activity,” said Grant. “My patients range from young athletes to older active folks.” A former athlete himself, Grant is active in local sports and provides medical coverage for the NCHSAA state football championship.

Grant performed arthroscopic surgery on Turner’s knee last December. He smoothed the damaged knee cartilage to lessen friction in the joint and removed damaged tissue to allow healthy cartilage to grow and replace it.

Turner’s recovery went so well he decided to schedule surgery on his shoulder last April. Grant faced other degenerative problems there, including bone spurs and tears, but recovery was even easier than for his knee. “My shoulder healed very quickly,” Turner said. “I was literally out of the sling in three days and had almost full mobility.”

Turner’s fellowship ended in the summer and he returned to Georgia with his wife and seven-year-old son, ready for his next assignment—and more fit for duty than ever.

“I don’t have the near-constant pain in my right shoulder or the clicking and pain in my knee when I walk,” he said. “My only regret is not having the procedures done sooner.” 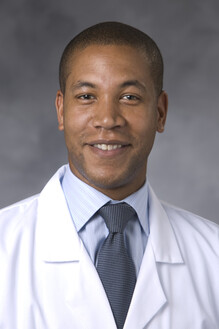