People with obstructive sleep apnea who haven’t found relief may benefit from a new pacemaker-like device that keeps the airway open during sleep. When other options have failed, “this treatment has allowed us to achieve a whole new level of success,” said Matthew Ellison, MD, an otolaryngologist at Duke, the first center in North Carolina to implant the Inspire hypoglossal nerve stimulator system.

Why a New Approach to Treating Sleep Apnea Is Needed

The most common type of sleep apnea occurs when soft tissue in the back of the throat blocks the airway and results in frequent, nightly breathing interruptions. This is called obstructive sleep apnea (OSA). Moderate to severe sleep apnea can increase one's risk of stroke, heart attack, and hardening of the arteries, called atherosclerosis. Daytime sleepiness from sleep apnea can interfere with concentration and increase one’s risk of causing traffic accidents.

Sleep apnea is most often treated with a continuous positive airway pressure (CPAP) machine. It often involves a mask that fits over your mouth and nose while you sleep. According to Dr. Ellison, about half of people who use CPAP don’t stay with it long-term -- either because it’s uncomfortable or doesn’t help their symptoms. For mild sleep apnea, non-CPAP options include lifestyle changes (weight loss and exercise) and fitted mouthpieces that adjust the lower jaw and keep the tongue from blocking the airway. For moderate to severe sleep apnea, these alternatives are rarely successful. Before the new Inspire hypoglossal nerve stimulator system (from Inspire Medical Systems), sleep apnea surgery options repositioned or reshaped tissue in the palate or throat; however, relief from these surgeries may fade over time as the tissues begin to relax or soften.

“That leaves many patients with untreated sleep apnea who could benefit from hypoglossal nerve stimulation,” Dr. Ellison said. The pacemaker-like device works by stimulating the hypoglossal nerve, which keeps the airways open and allows people with sleep apnea to get a good night’s sleep. Its effectiveness has been proven in clinical trials, which show it significantly improves sleep apnea and relieves symptoms such as snoring and daytime sleepiness.

How Does Hypoglossal Nerve Stimulation Work?

Hypoglossal nerve stimulation, also called upper-airway stimulation, involves three components that are inserted under the skin of your neck and chest. A sensor near your lungs detects your breathing patterns. A stimulator in your neck area delivers mild signals to the nerves that control your tongue, causing the tongue and throat muscles to shorten and moving your tongue and palate forward -- which keep your airway open. A small pacemaker-like device placed just below your collar bone coordinates the stimulation with your breathing, turning on when you inhale, and off in between to return your tongue to its relaxed position.

There's also a small remote control that turns on the stimulator before you go to sleep. You can set the system to run for the number of hours you want to sleep. A built-in delay gives you time to fall asleep before stimulation begins, and you can pause it if you get up for a bathroom break. If the stimulation is bothersome, the device can be reprogrammed. “People like being able to control it,” Dr. Ellison said. “Some like it to be off when they wake up, while others prefer to wake up with it still working.”

Who Is a Candidate for Hypoglossal Nerve Stimulation?

Hypoglossal nerve stimulation is a good option for adults who:

There are some exceptions to these general criteria, and hypoglossal nerve stimulation is not for everyone. People who are candidates for this new sleep apnea device will undergo a sedated endoscopic exam, during which a flexible camera is passed through the nostril to the throat to examine how the throat closes during sleep. The results determine whether you will benefit from hypoglossal nerve stimulation.

The surgery itself is done on an outpatient basis, and most people do not need narcotic pain medications afterward. After four to six weeks, the device can be activated.

At this point, the device is covered by Medicare and most commercial insurance policies in North Carolina. 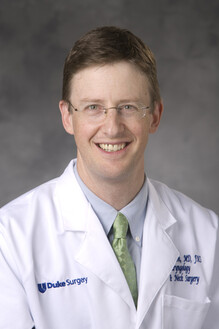 How to maintain a healthy weight

When Kids and Teens Don’t Sleep

A Vicious Cycle: Insomnia, Anxiety, and Depression
Back to Top