Ray Thompson was a teenager when doctors first suspected something was wrong with his liver. He was an adult when he learned his condition was autoimmune hepatitis, a chronic disease in which the body’s immune system attacks the liver. He kept it under control, but his luck ran out two years ago -- when he became so ill that he needed a liver transplant. While researching liver transplant programs, his wife discovered Duke was one of the best. Thompson was evaluated for the transplant and placed on the waitlist within one week of his first appointment. That remarkably fast turnaround is not uncommon at Duke.

For most of his life, Thompson managed his autoimmune hepatitis with medication. That changed in 2016 when he lost his appetite. “I didn’t have the strength to do anything,” he said.

He was referred to a gastroenterologist when his hands, feet, and abdomen swelled with excess fluid. His condition went downhill so quickly that he was admitted to the hospital. When his kids came to visit, he didn’t recognize them. When his doctors told him he had liver failure and needed a transplant, he barely understood the words.

While many hospitals won’t transplant patients as sick as Thompson was, the doctors at Duke are very experienced working with critically ill patients in dire need of liver transplants. In fact, with three transplant teams on call 24/7, they are prepared for every medical issue -- no matter how serious or complicated.

When presented with a patient as sick as Thompson, they don’t waste a second when there isn’t one to lose.

“We get everything assessed in a few days,” said Deepak Vikraman, MD, Thompson’s transplant surgeon. “ We have an emergency meeting so we can get them listed and the patient doesn’t lose the opportunity for an organ.”

Doctors use the MELD (Model for End-State Liver Disease) score, which is based on lab tests, to determine how sick patients are. The higher the number, the more urgent the need for a transplant. Thompson’s initial MELD score was 37, near the high end of the range. Thompson’s MELD score then spiked to 45. It bumped him up to the first position on the transplant list in the Duke region. Within one day, a liver became available. But Thompson’s body wasn’t ready.

“They had to reject the first liver because I had an infection,” he said.

The infection was treated, but his problems continued. His kidney function plummeted and he went on dialysis. He became delirious and his MELD score soared to 52. Thompson later learned he had a 1 percent chance for survival.

Thompson’s medical team managed his care through each crisis and got him back on the transplant list in just a few days. Thompson received a new liver the next day; his kidney function improved shortly afterward.

“Each day, I felt better. I could not have asked for better care,” Thompson said.

That level of care is constant at Duke, where doctors routinely treat people like Thompson whose risks are too high for other centers or whose initial transplants have failed.

And Thompson’s astounding recovery is just one more example of the exceptional patient outcomes achieved at Duke. Those outcomes explain why Duke is rated among the best liver transplant programs in the nation. In fact, when compared to the U.S. average for transplant program survival rates, data from the Scientific Registry for Transplant Recipients shows Duke’s survival rates are among the highest in the country.

“Our success comes from our expertise and teamwork,” said Dr. Vikraman. “We don’t consider it a single person’s job -- we take care of patients as a team.” 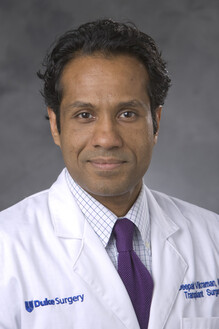 Becoming a Living Donor
Back To Top