Ever wonder how medical dramas develop their plots? Experts, like Duke neurosurgeon Oren Gottfried, MD, are often the brains behind the stories, ensuring the information and settings are accurate and plausible.

Dr. Gottfried started consulting and writing for television shows in 2010 because it fueled his passion for medical education. When he’s not performing complex spinal surgery, he’s making sure his patients understand how to care for themselves, or training the next generation of doctors to care for their patients. When those jobs are done, he works with television writers, directors and producers to ensure the information they convey to their viewers is accurate and informative.

“TV doesn’t have to be purely entertainment,” Dr. Gottfried says. “It can be an opportunity to educate viewers about diseases and conditions. I make sure the television programs I work with portray medicine accurately and in a way that allows people to gain knowledge.”

Dr. Gottfried is an avid consumer of medical information, reading 20 to 30 different journal articles every day. “Originally I was contacted for my knowledge about neurosurgery,” says Dr. Gottfried. “That opened the door for me to help with all areas of medicine.”

Currently, Dr. Gottfried is working with Royal Pains, a USA Network drama about doctors in private practice in New York’s Hamptons; Elementary, a murder mystery on CBS; and Complications, a series which follows an emergency room doctor that will air on USA Network.

His roles on the show range from writing and recommending scenes based on how a disease is diagnosed and treated; reading scripts; helping with dialogue and props, and ensuring the medical setting is as close to the real thing as possible.

While the work is fun and a nice break from his job as a surgeon, it’s his desire to help patients that gives him the most reward. “People are watching television and studying the Internet to figure out what’s wrong with them and sometimes being led in bad directions. I want people to gain some knowledge about medicine that may be useful to them some day, even while they are watching a fun television show.”

Learn More About
Neurosurgery at Duke 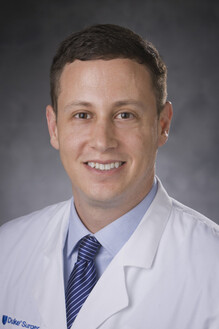 Working From Home Causing Back Pain?
By Morgan deBlecourt

Do I Need an Epileptologist?
By Morgan deBlecourt