A minimally invasive robotic device is eliminating the need for some patients to undergo open brain surgery to pinpoint the origin of their epileptic seizures. The device, in use at Duke and a small handful of epilepsy centers across the country, means neurosurgeons only need to make a few small incisions. The procedure is more precise, procedure time is shortened dramatically, and patients recover faster.

Diagnosing the Origin of Epilepsy Seizures

When multiple medications fail to stop epileptic seizures, a patient’s best hope for gaining control of their seizures is often epilepsy surgery. That can only happen if the doctors can identify the area of the brain responsible for the seizure and remove it safely. To identify that spot, neurosurgeons may perform a craniotomy, which creates a large opening in the skull. A plastic grid of electrodes is then placed on the surface of the brain to record the seizures and identify where they are coming from.

“They can provide a good recording of signals,” said Saurabh R. Sinha, MD, PhD, a neurologist specializing in epilepsy, and medical director of Duke’s epilepsy center. “But because they sit on the surface of the brain, the electrodes can’t access the folds or the parts of the brain between the two hemispheres, and its deep structures.”

Now, the team at Duke’s epilepsy center is using a robot to place depth thin electrode wires in precise locations in a very rapid manner. The procedure is called robot-assisted stereoelectroencephalography (SEEG).

A 3D reconstruction of the brain guides where the dozen or more electrodes will be placed. The neurosurgeon uses the robotic arm to make small, two- or three-millimeter holes in the scalp through which the rigid electrode wire is passed. Rather than sit on the brain as the plastic grid of electrodes does, the robotically placed electrodes go deep inside the brain. The procedures take about two hours. “Without the robot, this process would be much less precise and take about seven or eight hours,” Dr. Sinha said. The electrodes are much better tolerated by patients -- they cause less pain and swelling -- than grid electrodes.

Once the seizure location is identified, the electrodes are removed, and patients feel better immediately. That is a huge benefit over recuperating from a craniotomy. “When we put in the grids, the patient has to decide about surgery while the electrodes are still in their head,” Dr. Sinha said. “That’s not the best time to make such a careful decision. In this case, the electrodes are taken out, they can go home, and we can talk about the next steps in the clinic. It’s a much better process.” The procedure is also a better experience for patients in cases where the exact location of the seizure cannot be found or the location is the seizure origin is in a part of the brain that is inoperable. The use of SEEG means minimal discomfort for the patient.

Robotic Device Not for all Epilepsy Patients

The robotic-assisted procedure is not for every epileptic patient. Rather, Dr. Sinha said, “we now have an armamentarium of techniques and realize there are some patients where we are going to want to use the plastic grid and strips.” However, there are times when the epileptic seizures originate in a location that is not attainable with the plastic grid.

“When you are looking to investigate a large area, those electrodes can be uncomfortable and even dangerous,” he said. The robotic electrodes “offer options when those electrodes don’t do the job. The majority of procedures will be done with this newer technique in the future.” 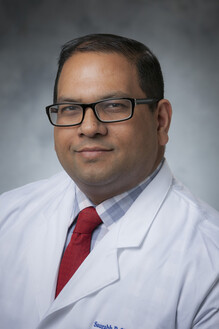 Epilepsy and COVID-19: What You Need to Know and When to Seek...

Do I Need a Headache Specialist?
By Morgan deBlecourt

Do I Need an Epileptologist?
By Morgan deBlecourt
Back to Top