Teresa Byrd almost lost hope after being diagnosed with stage 4 melanoma. After participating in a clinical trial studying a new class of drugs that received FDA approval in December 2014, her prognosis is now optimistic. “She is doing well,” says melanoma specialist, April Salama, MD. “She has a lot of hope.”

Teresa Byrd’s red hair and fair skin increased her risk for skin cancer. Yet, the 52-year-old nurse didn’t think much of the black mole that appeared on her lower right leg until doctors where she worked told her to have it checked. A biopsy confirmed she had melanoma.

Melanoma is a cancer of the cells that produce the brown pigment called melanin that is responsible for skin color, explained Duke cancer specialist April Salama, MD. While it’s the least common of skin cancers, it is the most serious. “It’s vital that it be caught early and treated aggressively,” she said.

I’m just thankful I got a second chance at life.

Doctors near Byrd’s home in Midland, NC, removed the mole and surrounding area, however, that mole was just the beginning. Within two years, more growths appeared on her leg. Byrd was referred to Duke, after doctors discovered the melanoma had spread to her lymph nodes, which were removed. “It came back stage 3,” said Byrd. “It was heart breaking.”

Treatment options for melanoma are somewhat limited after surgery. Melanoma is resistant to chemotherapy and radiation. Immunotherapy, such as interferon stimulates the body to attack the cancer cells. But the success rate is low, and side effects include exhaustion, flu-like symptoms and depression.

“Initially I declined treatment because I thought, ‘I’m not going to go through those horrible side effects if there’s only a 10 percent chance it will help me anyway,” Byrd said.

She changed her mind when the melanoma returned. After the interferon failed, the next step was a treatment called regional chemotherapy. A tourniquet at the top of her leg stopped concentrated doses of chemotherapy from reaching the rest of her body. While that procedure can benefit some people, it didn’t work for Byrd. She underwent another version of regional chemotherapy in which the drugs were administered for longer periods of time through catheters in her abdomen.

By this time, Byrd could barely walk. “I had to have a hip replacement. The cancer had spread to my liver, lungs and brain. It was stage 4.”

Byrd wasn’t ready to give up. “I had to fight for my children,” said the mother of four. “I didn’t know if I’d see my son graduate. People give you advice. They tell you to do this and that, but ultimately you have to go with your gut. I trusted the doctors at Duke. Dr. Salama did not stop. She suggested a clinical trial, and thankfully, I was a candidate.”

Salama was the principal investigator for a clinical trial studying nivolumab, part of a new class of drugs referred to as checkpoint inhibitors.

“The drug blocks what we think of as a PD-1 checkpoint or brake in the immune system,” explained Salama. PD-1 is a protein that helps melanoma cells evade the immune system. “Taking the brake off allows the body’s own cells to be reactivated and attack the melanoma tumors,” Salama said.

The trial was instrumental in the FDA approval of the therapy in December, 2014. Additional studies are still underway as doctors, including Salama, look to refine the appropriate length and dose of the drug for each patient, and determine if it works for other cancers as well. It’s now approved to treat colorectal and lung cancers.

Eighteen months after completing treatment in the clinical trial, Byrd is doing well.  “She’s had a good response and there is minimal evidence of active cancer left,” said Salama. “We are very hopeful and optimistic about her prognosis.”

Byrd agreed.  “I don’t want people to think melanoma is a death sentence. My two oldest children are grown and married now. My youngest son just got his driver’s license. I didn’t know if I could see that. I’m going back to work soon. I’m just thankful I got a second chance at life.” 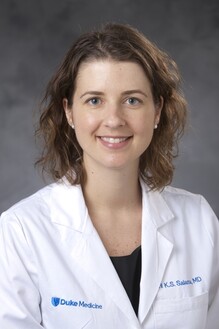