Duke neurosurgeons are the first in the area to use a cylindrical device to reach and remove deep brain tumors. A small tube inserted through a small opening in the skull eliminates the need for more invasive brain surgery, and preserves brain function by minimizing injury to surrounding brain tissue. As a result, patients often require fewer medications, go home sooner, and recover faster.

Traditionally, surgery to remove a brain tumor requires neurosurgery through a large opening in the skull, heavy sedation, and potent medications to relax the brain and keep it from swelling. Patients spend at least three days in the hospital before returning home to recuperate.

A new, tube-like device, called the Brain Path, gives doctors and brain tumor patients another option. Duke neurosurgeons are the first in the area to use the device to reach tumors deep in the brain.

First, sophisticated computerized imaging maps a safe path to the tumor. This helps to minimize manipulation of, and damage to, vital brain tissue, which helps preserve brain function. Using the navigation system, the Brain Path tube, which is about as wide as a dime, is inserted into the brain through a small opening in the skull.

Recovery following traditional open brain surgery can require a long hospital stay, and medications given to prep the brain for neurosurgery can make people feel worse before they feel better, explained Peter Grossi, MD, a neurosurgeon at Duke Raleigh.

Because the operation only requires a small incision, there is less bleeding and less risk. As a result, patients feel better faster. They often go home from the hospital the following day.

“This gives patients the best of both worlds,” Grossi said. “They get the benefit of having the tumor removed through surgery, but at the same time, we’re not putting them through a more extensive surgery or lengthy recovery period. It’s less invasive, less risk, yet still accomplishes the same goals.”

Grossi believes the approach may be appropriate for people with metastatic brain tumors, secondary tumors that have spread to the deep recesses of the brain, and some vascular malformations. It also gives doctors more options for patients who may be considered high risk for traditional brain surgery, such as the elderly and people with complex medical problems, he said.

Doctors have also begun using the Brain Path device to remove blood clots following bleeding or hemorrhagic stroke. For these people, traditional surgery isn’t always worth the risk. “This procedure allows us to remove the blood clot without putting them through a big operation,” said Grossi. 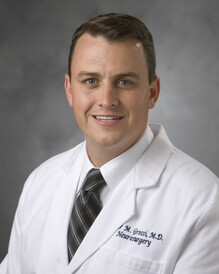 Do I Need an Epileptologist?
By Morgan deBlecourt