Due to the presence of COVID-19 in our community, visitor restrictions are in place for all Duke clinics and hospitals. For your safety and the safety of others, we recommend patients do not bring a visitor to Duke clinics, if at all possible. If a visitor must accompany a patient, only one individual over 12 years of age is allowed. Patients and visitors will be screened for symptoms upon arrival. Individuals with flu-like symptoms are not allowed. View the complete list of Visitor Restrictions.

Effective immediately, Duke Health is prioritizing and rescheduling some non-emergent or non-critical surgeries, procedures, and appointments. Check our COVID-19 (Coronavirus) page for updates.

Ginger Scott needed new options to treat her metastatic lung cancer. A clinical trial at Duke gave her just that.

Scott, a healthy, athletic 40-year-old mom of three, was in her Whiteville, NC, home, preparing food for a holiday party when she began to feel dizzy. “I thought, ‘Oh, I must need something to drink’ and took a break,” said Scott. “Within 20 seconds, I went into a full grand-mal seizure.”

A series of scans revealed the cause of her seizure: tumors in her brain that had spread from her lung. A biopsy confirmed that Scott, who had never smoked, had non-small cell lung cancer. Almost immediately, she began receiving radiation treatment.

She also began taking an oral medication targeted to her type of cancer. Scott’s cancer cells had an EGFR mutation, meaning they had an overactive form of a protein called epidermal growth factor receptor (EGFR) on their surface, which made the cancer cells grow and divide faster. The medication worked “for about 18 months,” Scott said. “Then my doctors started seeing some action in the tumor in my chest.” She had to stop taking the medication and look for other treatment options.

Scott's best hope was to be enrolled in a clinical trial. She learned about an experimental therapy that seemed promising for her type of metastatic cancer but didn’t qualify for the first clinical trial she applied to. She’d nearly given up hope when her sister-in-law, Shaw, did a search on clinicaltrials.gov and called with some heartening news. “She said, ‘You wouldn’t believe it. I found the same drug you were trying to get on; it’s in trial at Duke,’” Scott said.

According to her medical oncologist at Duke, Dr. Neal Ready, MD, PhD, Scott “had received as much radiation as she could get,” Ready recalled. “She was having seizures and was on multiple anti-seizure medications. There was no good therapy to control her cancer. She was potentially going to look at chemotherapy options, but chemo doesn’t get into the brain very well.”

To determine if Scott was eligible for the clinical trial, Duke thoracic surgeon Dr. Mark Onaitis, MD, did a minor surgical procedure to retrieve some tumor cells from the middle of Scott’s chest. The results showed her tumor was the type the experimental medication was designed to target.

That was in October 2014. Scott began taking the medication and has had good results. “It shrank her cancer, her seizures went away, and her cancer’s been under control,” said Dr. Ready. He noted that Scott still has tumors in her lungs and brain, but for now they aren’t growing.

The medication that Scott helped test has since been approved by the FDA, and she continues to take it. She also returns to Duke every six weeks for monitoring. “I’ve had nothing but stable results,” she said. “I’ve been very, very blessed.” But she also is aware that the medication isn’t considered a cure. “Certainly I worry. The cancer could develop some mutation around the treatment,” she said. “I know that’s a possibility, but there’s always a possibility that I might have a different result.”

She is grateful for the access Duke afforded her to the clinical trial and for the care she’s received. “It saved my life,” Scott said. “And the care at Duke has been wonderful. If I had gotten into a clinical trial in Texas or in Massachusetts, I was going to make those flights out of state for treatment. Whatever it would take, we were going to go. We’re so fortunate that Duke is here in North Carolina.” 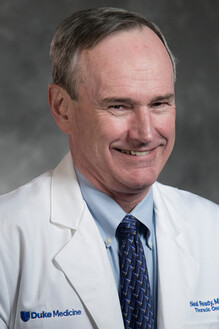 Diagnosing Lung Cancer May Get Easier for Some Patients

Clinical Trials: To Give and to Get
Back To Top