Raleigh resident Thomas Galvin suffered involuntary muscle contractions for decades—until technology at Duke allowed him to have surgery while asleep to quell the repetitive movements. Watch Galvin talk about the relief the surgery provided him in the video.

“The pain could be intense, really intense,” said Galvin. “And that just progressed for about six months … to full-blown dystonia.”

Galvin was diagnosed with cervical dystonia in the 1980s. “Dystonia is one of those conditions that causes muscle contractions, abnormal posture, and it can affect walking,” said Duke neurosurgeon Nandan Lad, MD, PhD. “It can be debilitating to many day-to-day functions.”

For Galvin, involuntary muscle contractions in his neck pulled his chin down to where it nearly rested on his chest, and he’d have to pull it up again. “A minute later, pull down again, and back up, all day,” he said. That caused pain in the muscles in his back and shoulders.

The muscles near his mouth pulled as well. “When you’ve got this neck pull-down, and you’ve got the mouth pulling down as well, it just became tough to talk.”

At first, medications and Botox injections provided some relief. “Eventually, medications start to be less effective and start to wear off,” said Lad. “That’s when patients start to consider surgery as a potential option.”

The surgery is the first step a treatment called deep brain stimulation (DBS), which uses electrical impulses controlled by a pacemaker-like device to help patients with movement disorders like dystonia and Parkinson’s disease. “We can rewire or reenergize the existing [brain] circuit and get it back to how it’s supposed to be functioning and make a meaningful difference in the quality of life,” Lad said.

Traditionally, patients are awake during surgery to implant the DBS leads—thin wires—in the brain. Patient responses, such as performing speech or movement tasks, help the surgeon confirm that the leads are in the right location. But Duke University Hospital is one of the few in the United States to use new technology, called intraoperative MRI, that allows patients to be asleep during the surgery. The surgeon uses MRI imaging during the procedure to confirm the location of the leads.

The following month, neurologist Patrick Hickey, DO, turned on the pacemaker-like device. “Mr. Galvin did excellent with his initial settings,” said Hickey. “He felt there was pretty immediate improvement. Within 2 to 3 weeks he started to notice some benefit.” It can take three to six months for dystonia patients to notice the full benefits of DBS therapy.

After a few follow-up visits to Hickey to fine-tune the device’s settings, Galvin is pleased with the relief he’s gotten. “Finally, my head is relaxed, and the pull-down is only slight and doesn’t occur all the time. There’s very little pain,” he said.

“That’s almost unparalleled in medicine,” said Hickey. “There aren’t many times where you’re able to have that significant an impact on someone’s life.”

“Mainly, I can just talk. For 30 years, I couldn’t talk this long,” Galvin said. He’s also enjoyed getting back to shag dancing, hunting and having better balance while walking. “I think I’ll live a lot longer,” he said. “Almost no pain or pull-down, and it worked. It’s fantastic.” 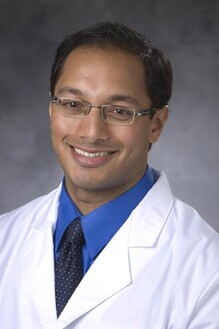 Recovering From a Concussion

Complex Aneurysm Removed During Life-Saving Brain Surgery
Back to Top