After being diagnosed with rectal cancer, doctors in Lou Ann Hadlock's hometown told her she would need surgery that would leave her with a permanent colostomy. Instead, she sought a second opinion at Duke, where doctors performed a minimally invasive procedure that preserved her sphincter. Today, Hadlock is cancer free.

When Lou-Ann Hadlock began taking wheel-thrown pottery lessons more than a decade ago, she was looking for an opportunity to make new friends. But Hadlock found “playing with clay” to be a much-needed source of comfort and healing as she received treatment for rectal cancer at Duke Cancer Center.

“The pottery and the support of my family saved my life,” said Hadlock, 60, who also is an avid swimmer and swimming coach. “I was focused on the clay and not on, ‘Oh, poor me.’ I didn’t want to go down that road. Pottery made me happy. The dirtier and grimier I was, covered in clay, the happier I was.”

The pottery and the support of my family saved my life. The dirtier and grimier I was, covered in clay, the happier I was.

Hadlock’s journey with cancer began during a routine checkup in 2010, when her gynecologist discovered blood during a rectal exam. Advised to get a colonoscopy right away, Hadlock underwent the procedure—her first—in Wilmington, near her home in Southport, N.C. Doctors diagnosed her with a form of colorectal cancer, which is the third most common type of cancer among men and women in the U.S.

The goal of her plan of care was to cure her of the disease.

Traveling the distance for a second opinion

Hadlock learned Duke’s colon cancer surgeons had advanced training and expertise to perform complex sphincter-sparing procedures. Although Duke was nearly three hours drive from her home, Hadlock decided traveling the distance was worth the possibility of a desirable outcome.

At Duke, she found herself in the caring, capable hands of an experienced medical team, including medical oncologist Dr. Hope Uronis, MD.

Hadlock’s cancer was “locally advanced,” Uronis explained, so her treatment began with five weeks of chemo and radiation therapy prior to surgery. She also had heart disease that needed to be carefully managed throughout her treatment.

“The heart condition made her case a little more complex,” Uronis said. “We had to take that into account with her care, but the goal of her plan of care was to cure her of the disease.”

In November 2010, Hadlock’s entire rectum and surrounding lymph nodes were removed via a minimally invasive approach, which used in the majority of colon cancer surgeries at Duke. it involves inserting a thin, lighted instrument (a laparoscope) through a single, tiny incision. Studies have shown patients recover faster and have fewer infections from the minimally invasive approach.

Though Hadlock’s sphincter was spared, a temporary ileostomy (which is similar to a colostomy, but involves the small bowel) was necessary to promote healing as Hadlock underwent another five months of chemotherapy. The ileostomy was reversed in April 2011.

After her treatments were completed, Hadlock traveled to the Duke Cancer Center every three months for follow-up CT scans. In the fall of 2011, a scan revealed a golf ball-sized tumor on Hadlock’s liver. She struggled to remain strong, even while undergoing surgery to remove part of her liver and diaphragm, as well as six months of chemotherapy.

“When the second cancer hit, that was devastating to me, my children and my husband,” Hadlock said. “I had to pull my big girl panties on and say to myself, ‘We’re going to beat this.’”

People treated for cancer at Duke benefit from a seamless, collaborative approach to care from a team of doctors, nurses and other professionals from a variety of specialties, including medical, radiation and surgical oncology, gastroenterology, genetics, and pathology. Each person’s care team meets regularly to determine a personalized treatment plan and make adjustments as needed. A full-time stoma nurse supports patients who undergo any ostomy procedure. Additionally, Duke pathologists test every tumor for possible hereditary factors. If screening shows a possible genetic link, patients are referred for genetic counseling to assess and reduce risks.

Hadlock is feeling great these days, walking two to four miles each day, coaching kids in swimming and making pottery. She is pleased with the personal touch she has received at Duke—especially the occasional e-mails from Uronis and Farkas to see how she’s doing.

“It was like everybody at Duke was working together for the benefit of me,” Hadlock said. “They wanted me to live. That was the feeling we had all along, from the first time we walked into Duke. They’re there for me, which I love.” 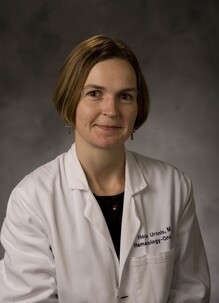 Four Questions to Ask Your Colonoscopy Doctor
By MaryAnn Fletcher