Randy Pence was going to die without a bone marrow transplant to treat his chronic leukemia. A match was found through the National Bone Marrow Donor Program. He met his donor at a reunion of Duke adult marrow transplant survivors in September.

Thanking Person Who Saved Your Life

Cancer survivor Randy Pence, 51, had a cheat sheet in his hand, telling him what he was supposed to say. But the moment Pence got up to the podium at the Duke Adult Bone Marrow Transplant reunion in September, he found himself holding back the tightness in his throat, unable to speak.

To his own admission, he’s a gabber—not the type to ever be at a loss for words. But he couldn’t find words to express his gratitude to the man who would soon join him on stage: a stranger from California who went through the challenging process of donating his bone marrow to save Pence’s life.

“How do you thank the person who saved your life?” said Pence, who has three children with his wife, Lisa. “Who gave you another day with your family? I just don’t know how to put it into words.”

Four years ago, the tall and sturdy book store manager from Charleston, West Virginia, was stricken with unexplained fatigue and weakness. He started losing weight, and traveled to Duke University Hospital, where doctors diagnosed the cause of his sudden illness: myelofibrosis, a type of chronic leukemia.

He needed a bone marrow transplant, or he would die. None of his relatives were good candidates, so doctors turned to the Be The Match, a registry run by the National Marrow Donor Program to find donors for patients with conditions such as leukemia and lymphoma.

Out of more than nine million people in the registry, doctors found just two potential donors. One of them, Steve Lasiter, a fire chief from California, stepped forward.

“Honestly, the idea of not going through with it never occurred to me,” said Lasiter, 48. “There was somebody in need. Of course I would help.”

He went through several rounds of testing before starting medications to prepare his body for the donation. The experience was tough on even Lasiter, a firefighter who had served in the U.S. Marine Corps.

“It felt like the worst kind of flu you can imagine,” Lasiter said. “But I kept saying to myself, 'If I’m this sick, he’s feeling even worse than I am.'”

Lasiter’s full strength returned in about a month, he said, and he was soon back to leading his battalion in Grand Terrace, CA.

Pence had a longer road ahead; he spent about four months under constant care as his body regrew new blood cells from Lasiter’s marrow.

Almost four years later, Pence’s prognosis is strong. He is back at work managing a family-owned book store, and returns to Duke every six months for check ups. But there was still one thing he wanted to do: thank the person who saved his life.

They all watched as Pence tried to finish his prepared speech, and a man who had been sitting in the back of the room started jogging to the stage. The two smiled and hugged as audience members blotted their own tears.

“It was truly a selfless act,” Pence said.

“We are truly blood brothers,” Lasiter said. “There’s really no other way to say it.”

The media was on hand to capture this emotional reunion. Watch and read the stories: 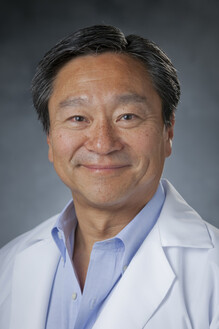