No one expected James Clark to walk again after a car accident left him with a severed spine. Thanks to a team of neurosurgeons at Duke University Hospital, Clark surprised everyone. Within six short weeks, he was back to walking.

On Easter Sunday in 2018, James Clark, 91, of Henderson went to visit the gravesite of his late wife. He cleaned the grave, said some prayers, and returned to his car. As he was leaving the cemetery, he collided with another vehicle.

Clark was rushed to Duke University Hospital, where doctors discovered his spinal column was severed in two.

Fortunately, Duke neurosurgeon C. Rory Goodwin, MD, PhD, knew what to do. Upon further examination, he saw that Clark was still able to move his arms and legs.

When patients have such traumatic injuries to their spinal column, the series of bones that support your body and protect your spinal cord, it’s usually associated with an injury to your spinal cord, Dr. Goodwin explained. The spinal cord makes up part of the body’s central nervous system. In the majority of cases involving spinal cord injury, people are paralyzed or neurologically impaired. That wasn’t the case for Clark.

Dr. Goodwin consulted with four other Duke neurosurgeons about Clark’s condition. Together they concluded the best option was immediate spine surgery to repair the damage.

"When we refer to the spinal column, it’s more of the bones that surround the spinal cord,” said Dr. Goodwin. “It’s like a person in a house. In this case his house completely fell down, but the people inside didn’t get injured. We had to rebuild the house around him, put all the walls back together and put a roof back on it."

Hope that Clark Would Walk Again

Dr. Goodwin used X-ray guidance to put Mr. Clark’s spine back into alignment and insert screws that would hold it in place in order for his body to heal.

Dr. Goodwin counseled Clark that he had a chance of walking again, though only a small percentage of patients with similar injuries are able to do so.

I thought it was possible at the time, but I told him that the chances are usually low,” Dr. Goodwin said.

A determined Clark was up and walking within weeks. He’s continued to progress and gain strength.

Four months after his accident, Clark is back at home and walking with only the help of a walker.

He said with a lot of practice and help that I’d get much better,” Clark said of conversations with Dr. Goodwin. “So I thanked him for that and shook his hand because he did a marvelous job for me." 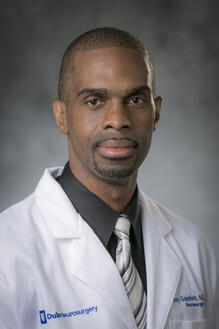 Back in the Swing After Spine Surgery

Working From Home Causing Back Pain?
By Morgan deBlecourt

Should You See a Chiropractor for Back Pain?
Back to Top